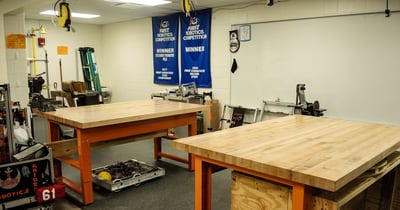 At the 2018 FIRST Robotics World Championships in Detroit, there were 601 teams from Michigan. To say that robotics is growing quickly is an understatement. Through grants, bond programs, and sponsorships, Michigan School Districts are making room on their campuses to support those teams. The makerspace, as these rooms are more broadly called, can include a robotics lab. These areas are “dependent on the size of the robotics involved”, according to Douglas Rich of spaces4learning.com in his article, Designing Robotics Labs.   “There is no difference between learning to program a demonstration robot or full-size robotics arm; so many schools choose the smaller robots to save space and money”.

Robotics is well supported by the automotive industry and other manufactuers to develop the next generation of engineers.  Subsequently, there are grants available for schools to create their robotics program and scholarships available for students through the competitions. Michigan schools are creating a space for a robotics program by either repurposing existing classroom areas, adding on space, or remodeling. Below, we discuss how some of our clients are making room for robotics.

Meridian Public Schools has an enrollment of 1,340 students and began to transform their school in 2009 to the New Tech program. At that time, an entire wing of their building was converted for the intent of collaborative education. Since then, we have remodeled more of the school for collaborative learning. They were able to do this with help from grants and a bond program, respectively. We remodeled two existing rooms into a divided makerspace and their Robotics Team Volatile Chaos Inhibitors 5203 uses it for building their robots with work tables, a white board, storage and an additional tool crib.

Flushing Community Schools has an enrollment of more than 4,000 students and they have just completed an addition/remodel to their high school through a bond program. Included in the remodel is repurposed space, approximately 400 s.f. for a robotics lab with adjacent pre-engineering classroom. The robotics lab includes ceiling pulleys, white board, work tables with under storage, and rubber flooring. The Raider Robotics Team #5561 has done well for itself with 2 banner years under their belt. Prior to this remodel, the team had been conducting their work at nearby Kettering University, now they can work together in their own space.

Swartz Creek Community Schools has approximately 3,600 students and they are presently remodeling four of their elementary schools. Each of these schools is getting approximately 1,300 s.f. of makerspace intended for collaboration or lab space for small projects. Areas will be open and able to be arranged to fit the need of a project.

We are currently in pre-construction with Whiteford Agricultural Schools, which has 750 students enrolled. Their plans include a makerspace (558 s.f.), collaboration room (200 s.f.), STEM classroom (1,245 s.f.), presentation room (253 s.f.) and tool storage space in their High School. The 6750 Whiteford Bobcats were a 2019 State Qualifier.

As you can tell, makerspace is becoming more common as hands-on application of coursework is gaining popularity. Wolgast is experienced with the construction of these areas and how to build them with quality for Michigan k-12 Robotics Teams. Dean Kamen, originator of FIRST Robotics says, “We are the only sport that every kid in school can participate in and then turn pro.” firstinspires.org